PLEASE JOIN US:
Feb 24, 7pm Audain Gallery presentation of our research during the last couple of months.

The last forty years have seen the reconfiguration of the global economy towards the restoration of wealth, power and privilege. In Vancouver, real estate developer money fills the pockets of art institutions and political parties alike while independent art spaces are obliterated by imperatives of gentrification and high stratifying rents. Private space is unaffordable, scarce, and ultimately dominated by the tyranny of profit, while public space is increasingly controlled by the police.

As art museums progressively capitulate to the given situation, they become answerable to the requirements of capital accumulation. When we do uncover and foster space on our own terms, it is always under the precarious threat of erasure. We affirm, however, that an exception persists against the logic of this world.

The wholesale privatization of public institutions and the return to the enclosure of the commons is an endgame that we reject. The alternative is in fact an opening: a working with and within multiplicity. This language has two forms, split between the state of the situation and the decrees of the commune. Between these two is a dialectic of pure force, moving between sabotage and reading; revolt and pedagogy; sharing and conflagration, and all that remains to be uncovered in the founding of a new common sense.

Our participation will consist of a reading group that is open to the public. Every other Wednesday Coupe will host a platform from which to address the acute condition of art of our time, identify the current aesthetic mode corresponding to Vancouver's regime of monopoly-capitalist development, and attempt to articulate the aesthetic and political practice proper to undermine it.

Friday, February 24
7pm, Audain Gallery
How to Trace the Destruction of the Old World on Your Hands (after El Lissitzky) (Presentation and discussion of final work)

**New Readings for the next three weeks**: 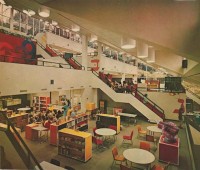